If you love store-bought baked beans you’ll absolutely fall in love with my homemade Venison Baked Beans. I mean, just look at the ingredients–you know it has to be good.

They are teasingly beautiful before baking them. So much so that my youngest son, Brandon had to steal a few bites after he saw them in the casserole dish.

He didn’t want me to bake them because they were so good, but I convinced him to wait. After filling his plate up twice, with the baked beans, bacon-wrapped backstrap, and bacon and cheddar scalloped potatoes he said it was well worth the wait.

I just realized everything I made that day included bacon 😀

The first time I made my own baked beans, when I removed them from the oven they were dark and didn’t look very pretty. I thought I almost burned them and was so disappointed.

I took a closer look and stirred them around a little and noticed they weren’t burned at all–the juices had formed a thick layer on top. They just needed to be stirred. I was so relieved. So, if this happens to you, don’t panic.

This pic looks so good I think I can almost smell it–I just need to concentrate.

I love these with Bacon Wrapped Backstrap, but they are also great with hot dogs, so see our Venison Hot dog Chili, recipe. I also like making them with Spicy Venison Meatballs, and Bambi Crockpot BBQ.

This recipe is enough to feed a small army–that’s the way I cook around here. My boys never eat the serving size–they usually eat at least 2-3 servings, so I always have to make large meals.

It serves 19 at 3/4 cup each, so if you’re not planning on feeding an army or a bunch of hungry young men you might want to cut it in half or even further.

See tips below for making this a more diet-friendly recipe.

Let your adventure start with Cabela’s…

*Percent Daily Values are based on a 2,000 calorie diet. Your daily value may be higher or lower depending on your calorie needs. The values here may not be 100% accurate because the recipes have not been professionally evaluated nor have they been evaluated by the U.S. FDA, but were calculated by MyFitnessPal, Inc. by Under Armour, Inc.

Check out our other recipes with beans… 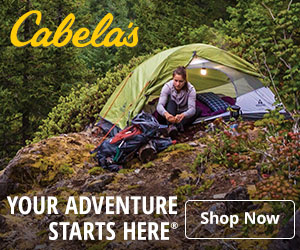